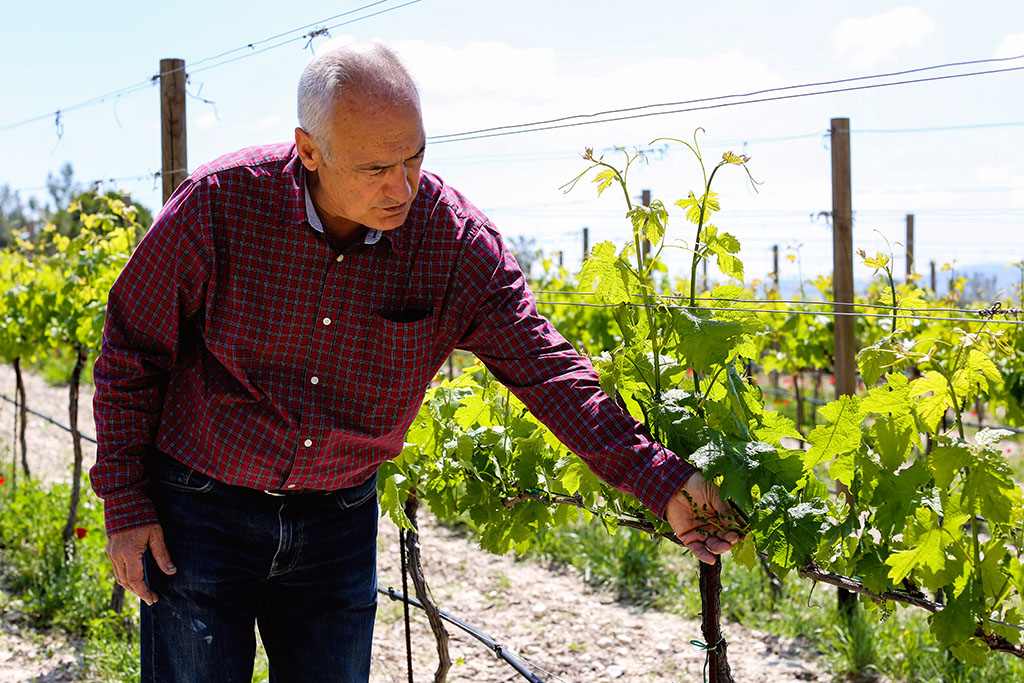 As the latest of the four vineyards in the Mumcular–Karova region goes into fully licensed wine production and sales in 2019, The Guide Bodrum explores the story of Mor Salkım Bağları, or “purple bunch” vineyard, and meets the enthusiastic family behind the wine.

As Melih and Emel Erdemir, owners of Mor Salkım greet visitors at the top of the hill overlooking the surrounding vineyards, it is hard to miss their undeniable passion for wine. Located off Çömlekçi Sokak, visitors are treated to a scenic two kilometer drive through the vineyard to a rustic stone building shaded by tall pines, where Melih starts to explain the history behind the winery.

Although the vineyards of Mor Salkım are quite new, the Erdemirs have played an integral part in the revival of Turkish vineyards since the ‘90s. In 1995, twin brothers Tahsin and Melih planted kalecik karası grapes on the 10 hectares of land their company bought next door to one of the oldest and most well known Turkish wine companies, Kavaklıdere, on a large property in Akyurt outside Ankara.

Initially selling their harvested grapes to Kavaklıdere for crushing, the economic crisis in the early 2000s led Melih to start making wine from their own grapes. This earthy form of therapy provided not only a respite from stress, but also set the stage to test and develop new techniques. Melih shared these new learnings with amateur wine and vine enthusiasts in Ankara, amongst them friends Füsun and Erhan Yürüt, who themselves later relocated to Bodrum to set up winemaking in the Kızılağaç valley, closer to Bodrum. Not far behind, Melih sold the Akyurt land in 2005 and bought 9.6 hectares of land in the Karaova valley near Mumcular, on land speckled with olive trees and previously used to grow tobacco and sesame.

Mor Salkım now has six hectares planted with grapes and roughly three hectares covered by 450 young olive tree groves scattered amongst mature pine trees, blending seamlessly into the pine covered landscape. The majority of plantings consist of four varieties of grapes: Bornova Muscat, Merlot, Shiraz, Cabernet Sauvignon, with small plantings of the Emir and Narince varieties. The remaining one hectare plot of land closer to Çömlekçi village, planted this winter, is home to 2,400 Sauvignon Blanc rootstocks, for which production will expand in the future.

The soil, or all-important terroir for vintners, and annual short rainy season combined with long, hot, dry summers are attractive qualities for vineyard and orchard owners in this region, where fruit sugars and grape characteristics are intensified by the heat. Melih notes that another advantage is that the land lies over a rich aquifer. Incidentally, this also explains the name of the local village, Çömlekçi village, where residents used to make pots from good clay dug out of the wet flatlands until the rising water table and rains flooded the depressions and created two small lakes.

Life in the vineyard is seasonal. Days are filled with pruning, weeding, tilling between the rows, caring for the trellis wires and fencing, and of course, the focal point for the year’s work, the harvest. Harvest begins early on hot July or August days, with trained pickers from nearby villages starting at 6am to selectively pick the ripe grapes from the vines as they move along the trellises. Baskets full of grapes are then transported by small tractors to be immediately crushed on site at a new production building on the high side of the vineyard.

A peek behind the scenes

The vineyard production building’s efficient design, dug deeply into the side of the slope, allows the tractors to tip the grapes straight onto a flat roof platform. From there, they are pushed down chutes to be crushed below, where in a single large barnlike room the process continues, transferring the grape juice into waiting stainless steel vats. These maceration vats are numbered and labelled with the variety of grape, or grape blend, a clear gauge on the side giving a clue as to what lies inside, red or white, pale or dark. The vats are wrapped in a grey insulating foam for temperature control, looking very smart and lined up in rows, reminiscent of tuxedos.

Fine American or French oak barrels will call the building home when production and space are expanded over the next few years. For now, Melih explains, they use a recognized winemakers’ practice of adding actual staves of oak to the Merlot and Cabernet to give that sought-after “oaked” depth of taste to the final flavors.

As the active winemaker and vineyard manager since his brother’s death, Melih is clearly relieved that after completing the long licensing process, guests to the café reception area in 2019 can taste their 2017 Merlot, 2017 Cabernet–Shiraz, white 2018 Emir–Narince blend and delightful 2018 Rosé. The hospitable Erdemirs are happy to show visitors around at any time of the year, inviting visitors to enjoy the seasonal rhythms of the land by joining them during the olive picking season, the grape harvest, the spring flowering season, taking a stroll under the pines of the buffering forest along marked trails, or by joining planned yoga sessions under the pines on a platform with scenic views of the distant valley and sea. Mor Salkım is the ideal place to relax under the shade of a pine tree with tasting platters brimming over with dried fruits, vineyard grown olives and local cheeses, catching the breeze blowing up from Tuzla lake and estuary in the distance. 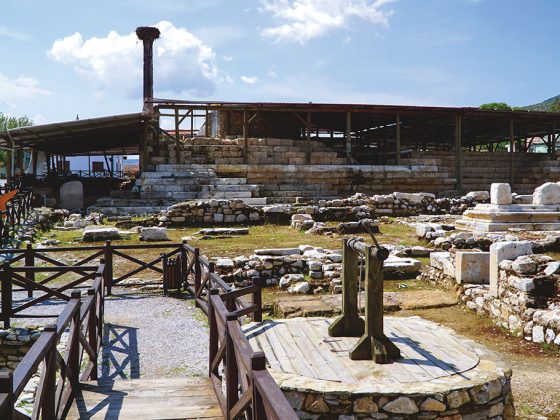