If you’re prepared to drive, it’s easy to discover ancient sites not far from Bodrum that are largely free of tourists. Head from the Milas-Bodrum airport towards Milas, and the ancient world meets you through fields and over forested hills. As a bonus, there is always a culinary discovery to be made along the way—a local fish restaurant or wayside refreshment stop with friendly locals.

There are two loops to follow, preferably on different days.

In the first loop, stay in the orbit of Milas (known in antiquity as Mylasa) and discover the ancient cities of Euromos and Iassos. These charming, olive-shaded, partly-excavated sites have long stories to tell.

To get to Euromos, skirt around Milas town towards Izmir for some 12 kilometers, and—just past Kızılcakuyu village—turn right at the brown sign to Euromos.

From the main highway the tantalising glimpse of ancient columns and architraves rising above trees becomes a vision of “…the temple, which is among the half-dozen best-preserved in Asia Minor,” wrote the English archaeologist and writer George E.Bean.

Walk around the base of this temple for Zeus, where sixteen Corinthian order columns still stand; some not fluted, or ‘grooved’, which has led some archaeologists to believe the temple was never completed—that work on the temple probably ceased in the second century AD, in the era of the Roman Emperor Hadrian, for reasons unknown. City walls, tombs, and the remains of the theater on the hillside complete the story of an ancient city which was second only to Mylasa in wealth and power in the region.

Then it is time to move on to the port of Iassos. Turn back towards Milas, drive two kilometers, then turn off for the village of Karakuyu and drive onwards for 27 kilometers across a road alongside the rich, neatly farmed fields of the valley to reach Kıyıkışlacık, the village beside the ancient site.

Read also:  Güvercinlik: a stopover on your way to Bodrum city

Iassos has certainly seen much in the ebb and flow of human affairs, wars, and peace. The site of Iassos was occupied and fought over from 3,000 BC to the Middle Ages. Traces from the Early and Middle Bronze Ages, Minoan, Mycenean, Hellenistic, and the prosperous Roman and Byzantine eras have been uncovered in excavations begun by Italian teams in 1960. Since 2015, Asuman Baldıran of Selcuk University has been the director of the excavations.

Once past the caretaker’s gate (and the cows) at the base of the small peninsula and acropolis, with the small village harbor on the right, the excavated sites unroll before the visitor in an almost overwhelming mixture of eras.

To the right is the Hellenistic-Roman Bouleuterion where one can sit as if in the council or explore the side tunnels and stairs to the upper seating rows. On the left is an excavation of a much older Geometric Period (900-700 BC) cemetery, in which volcanic ash from a Bronze Age eruption at Santorini (circa 1650-1500 BC) was discovered. Further on is an elegant row of marble columns, some in unusual colors and textures, displaying the wealth Iassos enjoyed from the marble quarries in the hills beyond.

Wander alongside the water to where the breakwater stones lead out to the poignantly lonely remains of the harbor tower which once guarded the fishing port. Local fishing boats putter out to sea, still in search of the same livelihood that Iassos citizens petitioned Alexander the Great for the rights to fish, wanting access to the shallow estuary across the gulf where Güllük and the airport now lie.

Climb up to the acropolis, fortified ‘most recently’ in the medieval era. Scramble around the rocks down the other side to the Artemis temple site.

After digesting the history of Iassos, it is well and truly time to relax as the ‘Iassosians’ must have done; by the waterside over a plate of fresh fish and salad in one of the restaurants on the bay.

The wide road from Milas to Yatağan makes the site of Stratonikeia easily accessible with the entrance just by the roadside after the Eskihisar village bypass, 75 kilometers from Bodrum.

Known as Atriya by the Hittites, and Khrysaoris and Idrias in the Classical Period (fifth-fourth centuries BC), it was re-founded and named Stratonikeia in the Hellenistic Period (321-31 BC) by the Seleucid ruler Antiochus I after his former stepmother—and later wife—Stratonike.

The first impression is of entering an old Ottoman village square with tables and chairs under an enormous old Oriental Plane tree where tea is served from an impossibly ramshackle old building.

There is nothing ramshackle about the beautifully restored Ottoman Şaban Ağa mosque (built 1846), and the restored Turkish baths beside it which has been dated to the 14th-15th century. This was the old Eskihisar village square before most of the villagers were moved up into the modern settlement to make way for a vast coal mine.

However, the old site survived, and it is an absolute gem. The neatly cobbled street leads past other Ottoman-style houses but between them are the remnants of columns and ancient stones, until the street diverges into two around the main excavations of the much older Stratonikeia city-state, one of the most important of the ancient Caria province.

Remains of Byzantine, Roman, Hellenistic, and older eras have been painstakingly excavated by Turkish teams since 1977, now under the leadership of Bilal Söğüt of Pamukkale University. In various reports he has declared the ancient city to have been the ‘City of Gladiators’, based on the size of the gymnasium where gladiator training and competitions took place.

The whole Stratonikeia site has been listed as a ‘tentative’ UNESCO World Heritage Site as it is a rare example of a site continuously inhabited from the Late Bronze Age (1,500 BC) to the present day (four families still remain in the historical village houses within the ancient city’s territory).

To wander between the ruins of the Roman Bouleuterion on one side of the lane and the substantial remains of an Ottoman Ağa house is pleasure almost unique to Stratonikeia.

Nine kilometers from Stratonikeia is the ancient site of Lagina, where a temple was built to Hecate, the goddess of the underworld, moon, and dreams. The temple remains are large and imposing. It was excavated between 1891-1893 by Osman Hamdi, the founder and first director the Istanbul Archaeological Museum. His house in the village of Turgut has been made a small museum. Turgut is 20 kilometers from Stratonikeia via the main Yatağan-Milas highway.

To reward adventurers—midway between the two sites, 13 kilometers from Stratonikeia and off the highway towards Yatağan—is the haven of Pınarbaşı, a trout restaurant where an enormous 800-year-old Oriental Plane Tree and younger specimens grow in the stream bed. The stream runs from coldwater springs throughout the year. Many years ago, the owners cleverly diverted some of the flow into trout tanks and into smaller channels, where they placed tables beside and even in the stream bed. Take off your shoes, chill your feet while dining in the shade, and congratulate your inner adventurer. 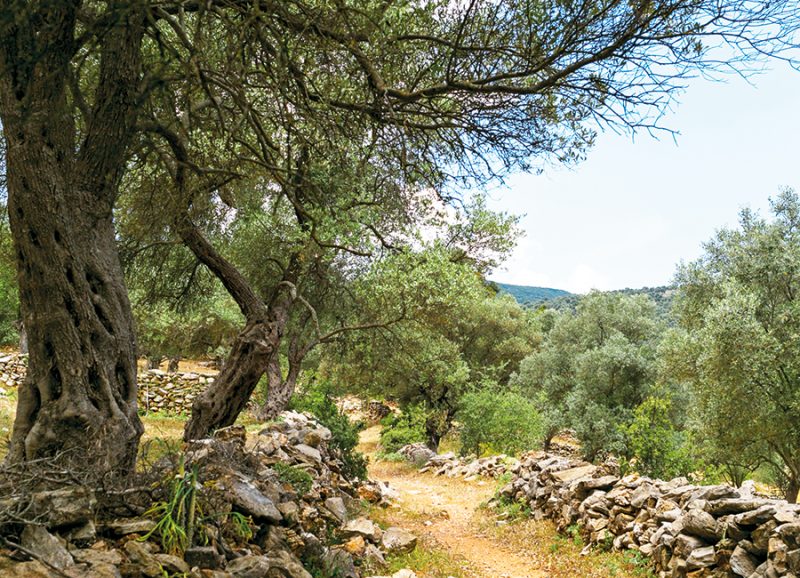